While the lovely North Carolina drawl riveted my attention, it wasn’t what first attracted it. That dubious honor went to the tall, slender form of its speaker — a silver-haired man clad in jeans and a button-down shirt, emerging with leisurely grace from a silver Mercedes — even before he spoke.

After a few fleeting seconds of entertaining, then rejecting, less appropriate responses, I managed to collect myself enough to say, “Perhaps, if you’re the property owner.”

“I am,” he said simply, extending his hand and introducing himself as Hugh.

My brother John and I were casually looking at a few properties before I was scheduled to meet with my realtor, Pat, later in the day. I hoped to get a preview of what was available now that I was ready to begin my search in earnest, and we’d been trying to locate the first property on my list, a partially-cleared 11-acre parcel. Confused by the addresses, I’d pulled my old 4Runner into a cutout in the road, parking it up against a farm gate where a rutted drive ran between a sizable pond on the one side and a sunken field on the other. As we gazed down at the field below us, I remarked to John that if that was the acreage, I’d have to pass. It didn’t look like it would take much for the pond on the other side to spill over the retaining wall and flood the field. We couldn’t be sure we were looking at the right parcel, however, because the realty sign was missing, and addresses for undeveloped land are approximate.

“Addresses out here aren’t as orderly as they are in the city,” Hugh commented in his soft, southern accent. “We make the numbers up as we need them.” He also explained the missing realty sign: The listing agent had gotten sideways with a local mining company by defending homeowners whose properties were damaged by illegal blasting activities. The company’s employees retaliated by making it difficult for her to do business — including stealing or destroying her signs any time they found one. My brother and I exchanged a glance.

“But this isn’t the parcel you’re looking for,” Hugh continued quietly, the loud, incessant barking of penned hounds across the road nearly drowning him out. He swept his arm up and away to a parcel adjacent to the land on which the dog run sat. “It’s that one.”

A sunny meadow nestled into the embrace of a woods, running more-or-less gently down to the road but vaulting sharply up into the trees at its opposite end. It was beautiful, but I wondered — neither for the first nor the last — what it would take to balance a structure on the slope. Hugh had bought the property, as well as the one on which we were standing, as a “buffer” for the rest of the neighborhood. Over a decade ago, a developer expressed interest in the land, planning to put a trailer park on it. Hugh, a retired Christmas tree grower, wouldn’t have it. He’d purchased some 25 acres to prevent the developer’s progress. I thought of the dilapidated trailers and shacks we’d passed on our way up to this idyllic meadow. Less than picturesque, to be sure. Which begged the question Hugh asked next.

“And what do you plan to build on the property you buy?”

I took a deep breath, inwardly steeling myself before levelly replying: “I plan to put a yurt on it.”

When I’d started my search for land in western North Carolina, more than a year prior to meeting Hugh, I’d told my first realtor (Laura) I wanted a three-to-five-acre plot, partly wooded, with a mountain view. I wanted enough space for my own yurt as well as two or three guest yurts that would become a source of income, as well as guest quarters for visiting family and friends. Using my sister’s three-acre lot as a guide, I determined that a similarly-sized lot would afford me a little privacy without putting too much distance between myself and my guests.

Linda obliged me by sending links to listings within about a 25-mile radius of Asheville, which I hoped to make a kind of hub for shopping, eating out, and social activities. Being reasonably close to Asheville would be a bonus for yurt renters and guests, as well, since it’s a sought-out destination for everything from brew pubs to fall color tours to tours of the Biltmore Estate. But I also wanted to be far enough away from the city for my home to feel like a retreat into nature.

And, so I’d explored the area, mapping out routes to the listings Linda sent me, taking notes about the tiny towns and rolling countryside, getting a feeling for this place I was considering making my home. I thought a lot on those drives: about the kind of neighbors I hoped I’d have; about driveways and right-of-ways; about mountain views and valley vistas; about forests and meadows and streams. I dreamed. I planned. I learned.

Before I knew it, a year had passed, and I had a new realtor, Pat, whom I’d contacted and with whom shared my vision. I was still readying my house in Indianapolis for the market when he sent the first set of listings. I was over the moon when I sat down to open them. And then…

I fired off a (slightly testy) email, reminding him what I’d asked him to find for me. He responded to my email with a phone call — as he (thankfully) so often does — and patiently explained.

Smaller plots, like the ones I sought, are generally situated in or near developments, where covenants and restrictions apply — and, while defaulted loans and estate sales happen, those plots are quickly snatched up. So Pat was sending me listings for at least 10 acres to help me realize my stated goals for the property. They were twice the acreage I’d planned for, more than twice what my projected budget would allow. But they were more likely to afford me the flexibility I wanted.

As long as what I wanted didn’t conflict too drastically with the aesthetic of where I planned to buy.

At the mention of a yurt, Hugh’s face stiffened, almost imperceptibly.

“I think you should drive on up the road there,” he suggested, tightly controlling his tone and indicating the ridge behind us with its big homes and beautiful approaches, “and see what we’re trying to accomplish here.”

“That’s a good idea,” I replied neutrally. “And I’ll definitely do that. But it seems you have…hesitations. Maybe you’d do me the favor of sharing them?”

Hugh let out a big sigh, then expressed concerns about how yurts would look from the road and what they might lead others to believe they could bring into the area — implying that I’d be setting a bad example.

“You know, Hugh,” I said carefully, “I don’t have to plunk a yurt right in the middle of that meadow. In fact, they’re devilishly difficult to cool in the summer, and I like my privacy, so it would actually be better if I tucked it back in the trees, away from view.”

Hugh pursed his lips and squinted at the tree line. “So we’d really only see it in the winter…”

“Exactly,” I told him. “And, you know, I’m certainly not opposed to planting trees and shrubs to screen people’s view. I love beautiful landscaping. Living in a yurt won’t change that.” I spent a few minutes painting a picture of my vision, of the need for beauty and for living in closer harmony with whatever land I bought, about the value of leaving some spaces natural. When I paused for a moment, Hugh offered to drive me up the ridge to show me where I would cut my driveway in from the road. My brother and I jumped into the truck with Bodhi, who had been waiting patiently for us, and we followed Hugh’s silver Mercedes up the rise, away from the ear-splitting racket of the neighbors’ hounds.

Later, in Pat’s office, we reviewed the listings he’d sent me, eliminating some of them because they were too remote, too hard to access, had too many bridges to wash out between the grocery store and me. As he clicked through the links, he found a listing for 11 acres of partially-wooded land.

“Well, that one’s out,” Pat said with a little grimace. “There are covenants restricting what you can build there. It has to be at least 1600 square feet, and…”

“What’s the address?” I interrupted. He told me.

Pat cocked an eyebrow at me, and my brother cut in. “Yeah, he’ll be fine. Denise had him changing the covenants for her by the time they were done talking. It took her 20 minutes.”

Pat raised both his eyebrows at that, then laughed. “Really?”

John shrugged with tongue-in-cheek casualness. “Yeah, she was a bit off her game today.” 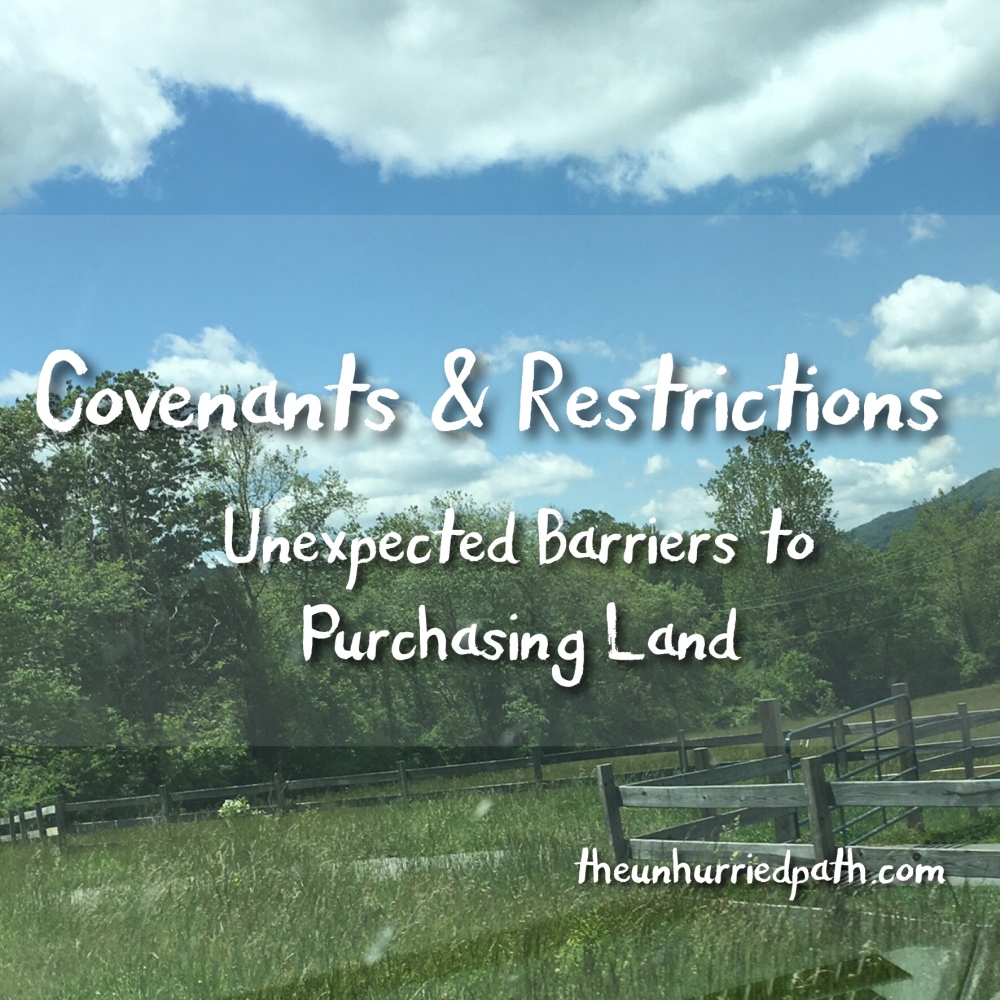 This post originally appeared on my creative writing blog, Small Conceits. Because my journey to what will become my mountain home involves a different kind of storytelling, I’ve moved these posts here to retain and extend the narrative without muddying the waters on Small Conceits.

This site uses Akismet to reduce spam. Learn how your comment data is processed.